In my country Christmas is celebrated on 25th December.There is a legend that Mary started her labour on “Ignazhden”- 20th December and she gave birth  at Christmas Eve, but the birth of Jesus wasn’t announced until Christmas Day.

Christmas Eve /called Badni Vecher/ is a very important day and the main Christmas meal is eaten in the evening.

The meal should traditionally consist of odd number of dishes – 7,9 or 11. Salt, pepper and  sugar are counted as separate dishes.

The dishes must be vegetarian. The most common ones are beans soup, “sarmi”/ cabbage leaves stuffed with rice/, peppers stuffed with rice, boiled wheat with sugar and walnuts, different types of pastries, lots of fruit and nuts and of course “oshav”- a dried fruit compote.

There is a special round and decorated loaf of bread called “pita”, which has a coin in it.

If you find the coin, you are meant to have good luck in the next year! The bread is normally cut by the oldest man, who hands it around the table.

In the past people used to put some straw under the table to resemble the place where Jesus was born. After dinner the children took the straw out of the house, set fire on it and jumped over the fire!

Traditionally, the table is left with all the food on it until the morning of Christmas Day. Some people believe that their dead ancestors might like something to eat during the night.

After midnight “koledari”used to go around towns and villages. These were groups of boys, dressed in traditional costumes who visited the houses and sang Christmas songs, wishing the hosts health, wealth and fertility to their land. The hosts paid back with Christmas cookies, fruit or some coins.

This custom still exists in some small towns and people are happy to feel the real Christmas spirit.

On Christmas Day itself people go to church and after that have a huge meal with relatives and friends –this time with meat.

They sing and dance, and congratulate each other with”Vessela Koleda”, which means “Merry Christmas”.

SURVACHKA – the MAGIC STICK of the BULGARIANS 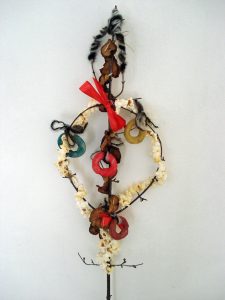 “Survachka” is a decorated stick, used by children to slap older members of the family on the back on 1st January, wishing them health and wealth for the new year.

It is made of cornel twigs, the   toughest tree, which is the first to bloom and the last to make fruit and is decorated with popcorn, dried plums, apples and peppers, coloured wool and coins.

This is done to bring fertility to the land and wealth to the household.

“Survachka” is believed to have magic power just on 1st January so the ritual starts early in the morning.

The children, called ”survakari” first do it at home and then visit their relatives and neighbours. While slapping them on the back with the” survachka” they recite special wishing poems.

It is believed that the stronger the hits are, the more likely the wishes are to come true.

As a reward they get some coins and sweets.

This custom is very old. It combines pagan and Christian elements. Its origin isn’t clear.

Judging on the words “surva”and “survachka”, some researchers think that Proto-Bulgarians invented it more than 1000 years ago.

No matter where it came from, it has survived the centuries and is still one of the favourite traditions in my country, enjoyed by young and old.

Here is one of the most popular wishing poems, recited by “survakari”:

Let your fields be full of wheat

and corn, your vineyard of red

grapes and and your garden of yellow quins!

Have a wallet full of money!

Be healthy, safe and sound until next year and forever!